My Lion's Mane mushroom grow kits are guaranteed to grow in ANY indoor spot, out of direct sunlight. Adorn your office desk with an incredible, edible mushroom "house plant" that requires ZERO care.

Multiple Methods for Cultivating Morel Mushrooms from Spawn, from Easy to Advanced

"How do you grow morel mushrooms?"

There are several planting methods for morel spawn that have successfully produced morel mushrooms. With morels, the planting technique is the key to success.

M. rufubrunnea is native to areas west of the Rocky mountains in the USA, and M. importuna is native to areas to the east. These species are typically selected for cultivation due to the fact that they do not require a mature association with a nearby host tree in order to produce mushrooms.

Morels behave differently than many species of mushroom. In particular, morel fungus requires a colonized wood layer underground, with a moist surface layer on top, protected from drying winds and sun.

Let's review some of the ways in which a morel grow kit can be planted. The first two methods presented are the simplest. Each method provides certain advantages, and at the bottom of this post, I'll summarize the benefits of each method.

The Simplest Method of All - Just Bury a Morel Grow Kit

The simplest way to plant it is to just plant the colonized morel mushroom kit itself. Start by lifting away the topsoil layer using a shovel or spade, with any vegetation attached. Dig a hole deep enough to place the morel kit at the bottom, with the top of the morel kit no higher than 3 inches below the top layer of soil. Fill the hole back up with soil and place your topsoil layer back on top. then, keep the area moist (not flooded). Once the morel fungus begins to run out of nutrients in the substrate of the morel grow kit, it will switch to survival mode and began attempting to produce morel mushrooms in order to escape the area in the form of spores.

If you have a lot of hardwood or fruit trees on your property, with abundant natural wood content present in your soil (or added in artificially), you might try this method instead of preparing a morel bed. The morel slurry method is easy and fun. How fun?  Check these kids out.  :)

In this video, the Urban Farming Guys start from a blended-up fresh morel mushroom in water, to get their morel spores and bits of mycelium. They've added 2 tablespoons of molasses and a tablespoon of salt and brewed their slurry for around 48 hours, with air bubbled into the bucket via an aquarium airstone, to allow for spore germination. It's a simple method with good results - but for their method, you have to start with a fresh morel mushroom to blend up.

If you don't have a fresh morel mushroom on hand, you can easily use one of my colonized morel kits to follow this procedure, with a lot less effort and time. Using a morel kit to start your spore slurry will actually increase your chances of success, due to the vast amount of morel mycelium that ends up in the slurry you create. Any time you increase the amount of mycelial mass used in your spawn material, you've increased your chances of success.

Simply take a big chunk of your fully colonized morel grow kit, place it in a bucket of cold tap water, and mash/mix the solid block into the cold water. You can even mash it up by hand, if you wish.

Starting a morel slurry with a big, fully-colonized mushroom kit gives you the advantage of starting with a HUGE mass of morel mycelium, and includes a colonized food source as well - which will improve your chances of the morel "taking hold" in your garden. An 8.5 lb morel mushroom grow kit, divided evenly with a clean knife, could be used to produce 30 gallons of morel slurry with a 5 gallon bucket. You could inoculate by hand a pretty good-sized area with 30 gallons of spore slurry.

Don't put your spore slurry through a sprinkler system, due to the possibility of clogging the sprinkler heads with little chunks of substrate and mycelium. Use the morel spore slurry immediately after assembling it - there is no need for the morel to further colonize the slurry, since it has thoroughly colonized the substrate already. All the little bits of grain and sawdust are the morel's food source already, and everything is poured out onto your garden.

The best time to inoculate your area with a morel spore slurry is right after a rain, or even during a rainfall. A sprinkler can be used to achieve the same effect. It is important that the area does not completely dry out at any point, but especially during the first week after you've tossed out your spore slurry.

Morels are currently sold at around $50-60 per pound. They can be tricky to find. Might even cost you a whole day and a few miles, looking for them. Go on, toss them in and hit the blend button. It might be harder than you think, to hit that blend button and liquefy your prized morels, thereby rendering them undelicious.

I make morel mushroom kits, pick up one today and use it to make your slurry instead. They're currently $49.95 with free shipping to anywhere in the lower 48 states. With a morel mushroom kit, you'll get 8.5 lbs of substrate that will become almost totally consumed by the morel fungus over time.

It's actually more effective to take a morel kit and turn it into morel slurry, than it is to use a fresh morel mushroom. This is true for several reasons. For starters, you'll get more morel mycelium mass to start with. Second, it comes with the morel's food (substrate) attached to the morel fungus, which helps it get started in your garden. Third, you can turn it into slurry immediately after it is fully colonized, and there is no need to bubble air through it for 2 days - just mash it into water to create a slurry, no other ingredients or treatment required. I recommend mixing it into single 5-gallon bucket, then distributing the contents into 5 other buckets - creating 30 gallons of liquid morel slurry.

This method is published in Organic Mushroom Farming and Mycoremediation by Tradd Cotter - an excellent read for anyone looking to get into this hobby.

The layered bed method creates a trench that is 8 feet long, 2 feet wide, and 1 foot deep.

Layers of the morel bed, starting from the top down: 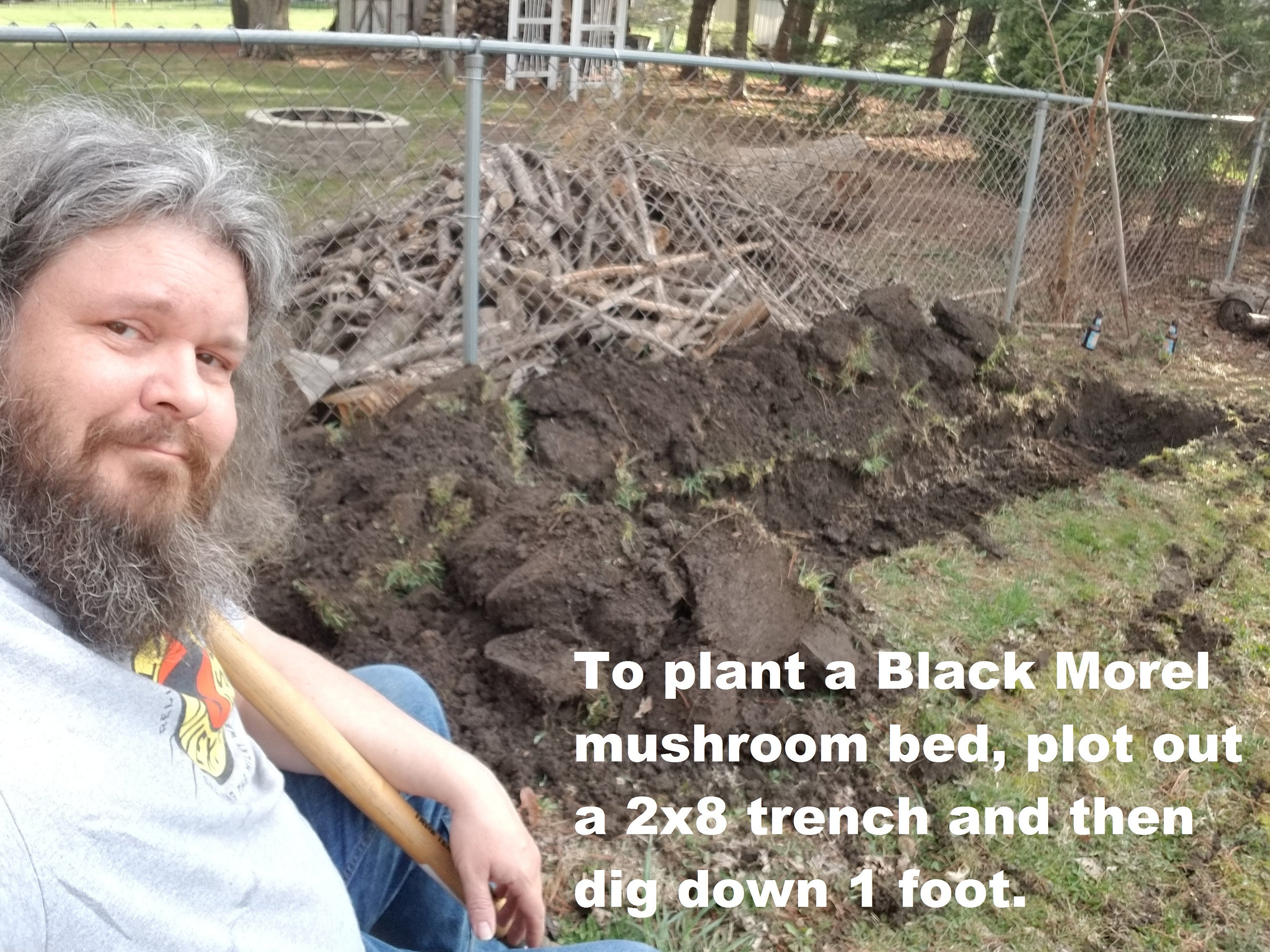 The theory behind the morel bed construction is that the morel mycelium will grow from the top of the trench downward.

Morels will fruit generally in response to one or more of the following associated factors:

The invention provides a method for using raw material to cultivate morchella. Specifically, a mushroom house with 30% of sunny areas and 70% of sunless areas can be built on the place where soil properties are loose and moist and water is discharged well; corncobs, bits of wood, bran, chaff, bean flour, plant ash, phosphatic fertilizer, gypsum and sugar are utilized as the raw material; cultivation pits are dug in the mushroom house, two layers of the material are laid in each cultivation pit, two layers of strain are scattered in each cultivation pit, and soil covering is conducted; finally, air humidity in the mushroom house keeps ranging from 85% to 95%, temperature ranges from 5 DEG C to 16 DEG C, and sporocarps can be formed in about one mouth in the environment. By means of the method, the defect that mass commercialization artificial cultivation of the morchella is not achieved so far is overcome effectively. Meanwhile, the produced morchella is cultivated in a wild imitating mode, and therefore entities of the morchella are excellent. In addition, when the method is implemented, the raw material is directly used for cultivation, the production process does not have the procedures of bagging, sterilizing and disinfecting, time and labor are saved, and work efficiency is greatly improved.

Here's another look at a patented method:

All of these planting methods can be achieved, starting with a colonized morel mushroom grow kit. How you plant it is up to you.

Any of the above methods may produce for you, and all of them have produced. Your morel grow kit is both a tool and a partner in this process. When you're ready to get started - check out my shop link to select your species (m. importuna or m. rufobrunnea) and get started on YOUR morel mushroom grow.

I'd love to see and share photos of your success, and I'm available to answer questions you may have. Good luck on your grow!